A pair of New Albany prospects you need to know

When it comes to New Albany high school sports, the men’s basketball team takes the front seat. Rightfully so, as they are the number one ranked basketball team in class 4A. New Albany fans must wonder if the hardwood success can trickle over onto the gridiron. Second year head coach Sean Coultis has plans to make that happen for the New Albany Bulldogs football team and it will start with two standouts in 2018 do-it-all Rondale Moore and 2019 defensive end Stephon Herron Jr. Coultis brings a winning attitude with him to New Albany, where he has experienced success at previous stops, including a Illinois class 8A state championship. He has also coached several division one players in that span.

However, he thinks freshman Stephon Herron Jr. may be the best of the bunch. “I was fortunate enough to coach Antonio Morrison (started as a Freshman at Florida and was their leading tackler last year), Tuf Borland (going to Ohio St), Micah Dew Treadway (at Notre Dame), Julian and Jacob Huff (Minnesota), Parrker Westphal (Northwestern). Stephen Herron Jr is a monster! I have no doubt he can play big-time D1 football” said Coultis. “Stephen Herron Jr is a future D1 player. Already one of the strongest kids on our team, 6 foot 3 and runs like a deer. A man amongst boys and will only get better.” Herron only a freshman, started varsity for the class 6A Bulldogs, accounted for 75 tackles and 5 sacks along the way. FBS programs like Florida State, Tennessee, Kentucky, Louisville have inquired about the prospect.

Rondale Moore plays every offensive skill position for the Bulldogs. He’s also the point guard for the top ranked men’s basketball team. At 5’7 he uses his quickness on the court and field to elude defenders. “Rondale is unbelievable. A Sophomore, with a 3.55 GPA, plays point guard on the basketball team, runs track, has 4.35 speed with a 35 in vertical” said Coultis. “Pound for pound strongest kid on our team. He would be a great slot receiver for a spread team in division one.” Moore was very productive for the Bulldogs offense, averaging 8 yards a carry and boasted 8 rushing touchdowns. All while hauling in 29 catches, and gaining 410 yards with another 5 scores at receiver. – article Rondale Moore

There’s some excitement about freshman quarterback Dylan Clark who started the last two games of the season for the Bulldogs. The 5’11 160-pound freshman led the bulldog offense to a total of 85 points in the last two outings. “He’s a competitor” said Coultis. Clark who also plays three sports for New Albany.

New Albany is headed in the right direction with Sean Coultis leading the way, and you can expect a few more division one football coaches to be roaming the hallways as well. 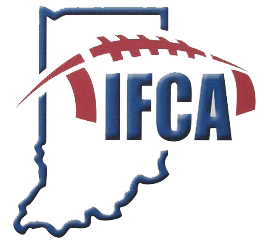